The script tree is intended to facilitate working with scripts. There you will find predefined functions and examples, which can be used by double-clicking on the cursor. 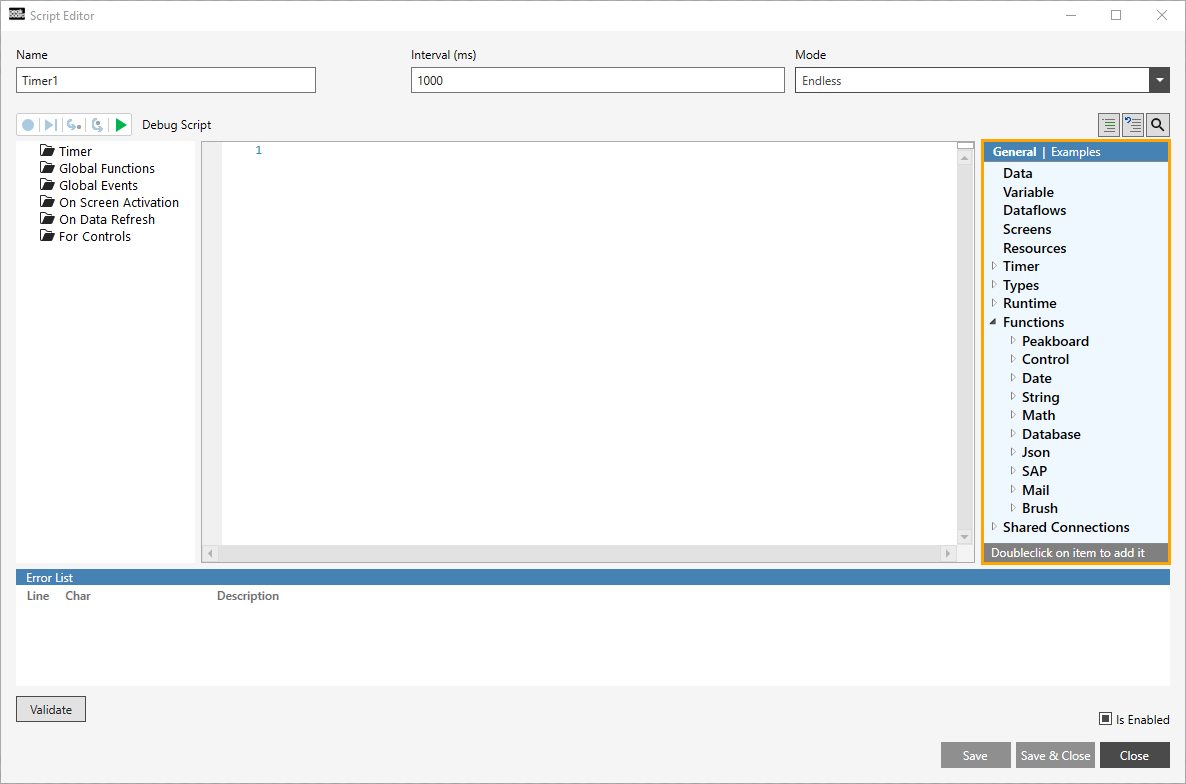 Here you can find all data sources created in the Explorer as well as the characteristic functions.

For example, a time data source contains functions such as “Format” or “Lua Date”. Via “Format” the date can be changed analogous to the format function of a control, as described here.

Here you can find all variables and lists created in the Explorer, as well as their characteristic functions.

For example, for a variable of type Number the corresponding “to String” function.

Here you can find all dataflows created in the Explorer as well as the characteristic functions.

For example, the previously aggregated column of a dataflow can be called here.

Here you can find all controls created on the screen that have a control name, as well as the functions characteristic of the control.

Here you will find all resources created in the Explorer, as well as their characteristic functions

Here you will find relevant functions for the timer

Here you can find functions for visibility or coloring of controls.

Functions for the Peakboard Runtime.

Standard functions included in the script editor. With the help of the script Global Functions you can create your own functions at any time.

Enables output to the log of the Peakboard Runtime using peakboard.log(), for example.

Includes a simplified function to make a control visible or invisible.

Here you can find common functions to work with a date or time. However, these functions do NOT replace the time data source. Rather, they extend the range of preconfigured functions for time manipulation.

These functions are mostly used when it comes to filtering certain text values within a Dataflow.

Contains some functions for handling numbers. For example, the “To number” function can be used to convert a number from the String datatype to the Number datatype.

The functions listed here are mainly used for writing to SQL.

The functions listed here are mainly used for writing to SAP.

Here you will find preconfigured functions for sending e-mails via the Peakboard.

Function to color something using a hex code.